Sometimes, all it takes is a steady arm around you to get you through a crisis.

We’re thinking of the manager of a telecommunications firm who found herself out of work after decades on the job, leaving her frantic over where her next meal was coming from and how she and her children could afford to stay in their apartment.

Or the former U.S. Marine, temporarily down on his luck, who needed help finding shelter. Or the job seeker who desperately reached out for help with restoring his driver’s license so he could show up for interviews.

To these men and women, it will come as no surprise that the Crisis Ministry of Mercer County has just embraced a new name to better reflect the collaborative role the nonprofit plays in the region.

The ministry is now known as Arm in Arm. But its vision – securing food, housing and work for more than 5,000 families – will thankfully stay the same.

“Our tagline, ‘Better together,’ expresses our belief that we all benefit when everyone in our community thrives, and that it takes our whole community to ensure that we all thrive,” says executive director Carolyn Biondi. 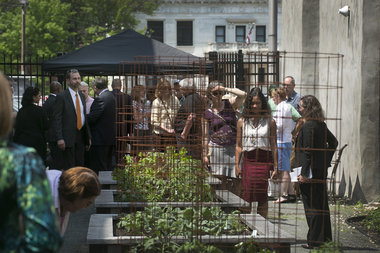 And by “all,” Biondi means the people, congregations, corporations, foundations, schools and businesses that work in tandem when individuals or families find themselves sinking under life’s burdens.

In 1980, leaders of two Princeton churches – Nassau Presbyterian and Trinity Episcopal – came together when they saw the financial suffering around them.

Today, that effort has grown to 15 staff members and hundreds of volunteers, but the needs remain as pressing as ever, especially as New Jersey has been slower than many surrounding states to recover from the job losses of 2008.

The organization’s web site notes that Arm in Arm is one of only 49 nonprofits in the country out of 8,000 to receive a perfect score of 100 from Charity Navigator, an independent evaluator that measures accountability and transparency.

As a result of Arm in Arm’s life-saving services, low-income families have access to food pantries that provide them with up to three days of groceries. Teams of volunteers also deliver food to the elderly and housebound in Princeton and Trenton.

In every aspect of its ministry, the organization stresses the dignity of the people it serves, the healing power of working together.

As Arm and Arm celebrates its three-and-a-half decades with a brand new name and a refreshed sense of purpose, we salute its mission and wish it continued strength.

By  Times of Trenton Editorial Board