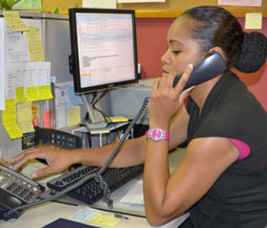 The Crisis Ministry receives hundreds of calls each month from people facing shut-off of utilities due to non-payment. We assist as many qualifying callers as we can with direct payments of up to $400 to the utilities.

In some cases, however, the cause of the issue calls for a different kind of help.

“I always try to find other ways to help when there’s some type of red flag,” says Crisis Ministry Utilities Coordinator Vanessa Lagares. “In some recent cases, the bills were so high that any help we provided would not make a dent. I directed the callers to contact the Board of Public Utilities.” The BPU representative helped to restructure the bill into extended plans that would make the monthly payments manageable while still ensuring that the caller would make good on his bills. “It took about three days for the case to be resolved — a long time, but worth it,” says Vanessa.

Sometimes the assistance will be, rather than direct financial assistance, a payment plan that Vanessa is able to work out with the utilities provider on behalf of the client. “Many calls come from people who are on a fixed income,” she says. “A lot of our callers don’t know where to turn to or what kinds of questions to ask. We sometimes are able to help them sort things out beyond the direct aid we provide.”

In one such case, a caller had a $17,000 utility balance. Vanessa knew something was not right about this unusually high balance, which appeared to be several years in the making. She referred the caller to Legal Aid, which helped get to the bottom of the situation. It turned out that a faulty meter had been measuring and accumulating the monthly usage of an entire apartment building, something that the landlord should have been aware of. The erroneous billing had created a destructive domino effect as the tenant struggled but failed to pay overly high utility bills and fell behind financially in other areas. In the end, the bill was wiped out and the caller received an additional $2,000 credit to make up for what were not payment arrears but rather overpayments.

“The people we help are very thankful for the advice and advocacy we provide,” says Vanessa. “It’s helping people that makes me happy. That’s how I like to leave at the end of my day.”